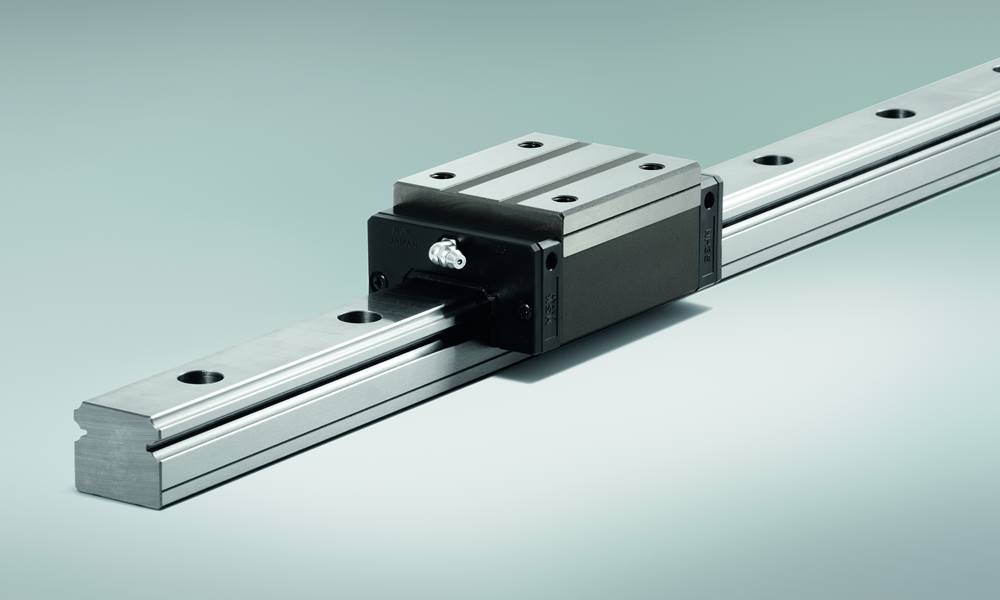 A leading manufacturer of blow moulding machines has recently replaced its linear guides with the NH series from NSK. The move comes after the OEM received complaints about the poor service life exhibited by its previous linear guides, which are used to move the mould platens.

Blow moulding machines, which are used to manufacture hollow objects such as plastic bottles, feature linear guides that are subject to very challenging operating conditions. As a result, service life can be compromised if the optimum linear guide is not selected, as this particular OEM discovered. The manufacturer began receiving complaints from customers who were unhappy that the linear guides were showing visible signs of wear after just 12 months. As blow moulding machines operate with fast cycle times and high clamping forces, any wear to key components such as linear guides can be extremely detrimental to the manufacturing process.

To investigate the situation, the machine manufacturer challenged its existing supplier of linear guides, but was told the wear had resulted from alignment errors. In other words, the supplier was intimating that the OEM had made errors when assembling the linear guides to its machines.

Dissatisfied with this answer, the manufacturer turned to NSK, requesting that the company undertake a full assessment and failure cause analysis. Once the investigation was complete, NSK discovered there were in fact some very minor alignment errors but that these were not the principal cause of damage to the guides. At the same time, NSK technicians established that the load factors given by the linear guide supplier had been calculated using a method which produced results quite different from the values calculated using industry-standard ISO formulae.

The recommendation was made to replace the existing guides with equivalent ones from the NSK NH series, which offer higher load capacity and very long service life due to their optimised design, especially in cases of dynamic stress, overloading, impact loading and shock loading. These effects are often unavoidable in blow moulding systems, so linear guides must be designed accordingly.

For the NH series, the relevant load factor values are calculated based on ISO standards, which is not always the case for linear guides. Very often, values are calculated from tests which have not been made under ISO conditions. The values may appear to be better, but for NSK, a comparison based on the ISO standard is the correct method and one that users can replicate.

A growing number of reputable moulding machine manufacturers, as well as builders of machine tools and handling systems for semiconductor production, are benefiting from using NH series linear guides. In the case of the blow moulding machine manufacturer, the switch to NH guides led to a significant reduction in the wear susceptibility of the clamping units. As a result, the OEM has now equipped its entire range of machines with NH series linear guides from NSK.