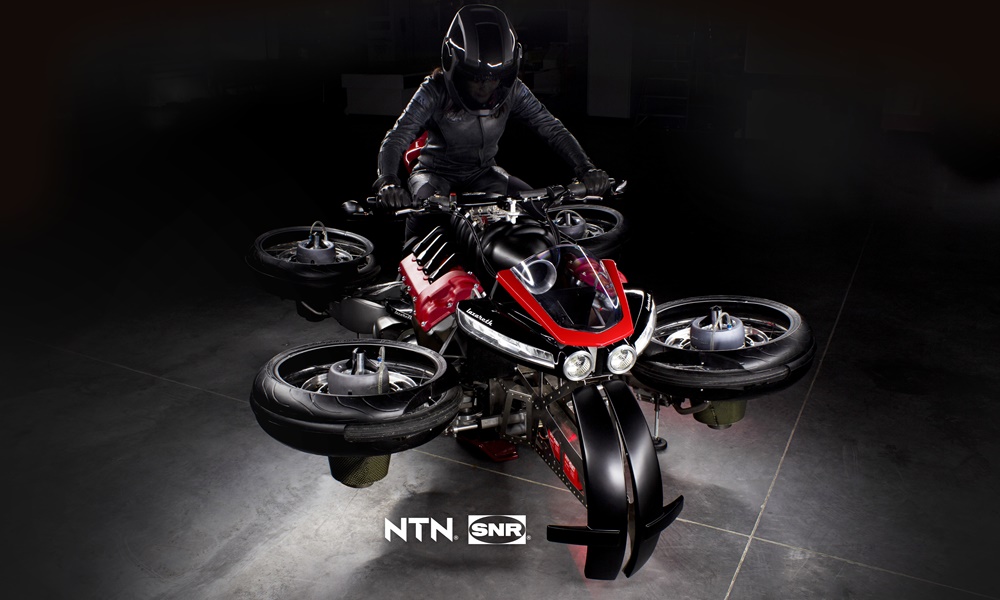 For the third time, an innovative project brings together the two companies from the Rhône-Alpes region. The challenge is to design and build a motorcycle that can fly. The wheels fold out and the turbines positioned at the centre of each wheel enable the motorcycle to take off. NTN-SNR took up the challenge posed by a wheel-mounting design that allows the suspension arm to rotate and four engines to be inserted into the centre of each wheel.

This world exclusive was unveiled at the party organised to celebrate the 20th anniversary of LAZARETH, held on 31 January 2019 in Annecy-le-Vieux.

The LMV 496: an exceptional project and a technical challenge

On the occasion of its 20th anniversary, LAZARETH, the vehicle manufacturer, took on an unprecedented and extraordinary challenge. It decided to build the first flying electric motorcycle, the LMV 496. Ludovic Lazareth naturally turned to NTN-SNR for assistance during this highly technical project. In order to develop this innovation, the entire design of the wheels and the bearings had to be reconsidered and an integrated solution put forward. The project concerns a tilting electric motorcycle whose two front and two rear wheels are twinned. While the motorcycle is in motion, the wheels fold out thanks to very specific kinematics and the motorcycle takes off, powered by four turbines positioned in the centre of each wheel.

This unique model was unveiled to the public at the company’s anniversary celebrations held on 31 January 2019 at Espace Rencontre in Annecy-le-Vieux.

NTN-SNR teams were very much involved in and made a huge contribution to this project. Over a period of three months, an application engineer and a designer worked on this subject. The execution phase then began. At the beginning of December 2018, all four bearings were delivered to LAZARETH.

The challenge faced by NTN-SNR and LAZARETH was to place the engine turbines at the centre of the wheel – a space initially meant for the bearings. Vincent Pourroy Solari, NTN-SNR Innovation Manager explains: “LAZARETH gave us the scale model and the 3D files for the flying motorcycle’s chassis. With these elements, we studied and designed the wheel hubs, the wheel bearings, the engine mounts, the wheel mounts, as well as the arm joints so that the wheels can fold out when the motorcycle takes off. The main challenge was to reduce the weight so that the thrust of the four turbines enables the motorcycle to take off, while leaving room for the turbine in the centre of the wheel.”

In addition, the study covered the dimensions of the wheel bearings and joint bearings. It was also necessary to calculate (using the finite element method (FEM)) the deformation and constraint forces of all of the parts to validate mechanical performance in light of external stress (overheating of the turbine, management of stress from the ground and in flight, etc.). Finally, keeping the solution as light as possible was key: it could not weigh more than 2.2 kg per wheel.

NTN-SNR and LAZARETH, a long-standing partnership

“Cooperation between the two companies began in 2013 with a project regarding an urban vehicle fitted with 4-kW engines, the Too’in. Our two companies are just as keen to work on these innovative projects,” notes Ludovic Lazareth.

The partnership continued in 2015. LAZARETH decided to launch an electric version of its well-known sports tricycle, the WAZUMA. NTN-SNR supplied the project’s wheel-motor technology.

The E-Wazuma is equipped with two 30-kW electric wheel motors located in the rear twin wheels.

“Working with Ludovic Lazareth on his emblematic vehicles is always a formidable challenge. It is also another opportunity for NTN-SNR to think outside the box, and that is what innovation is all about.” concludes Vincent Pourroy-Solari.