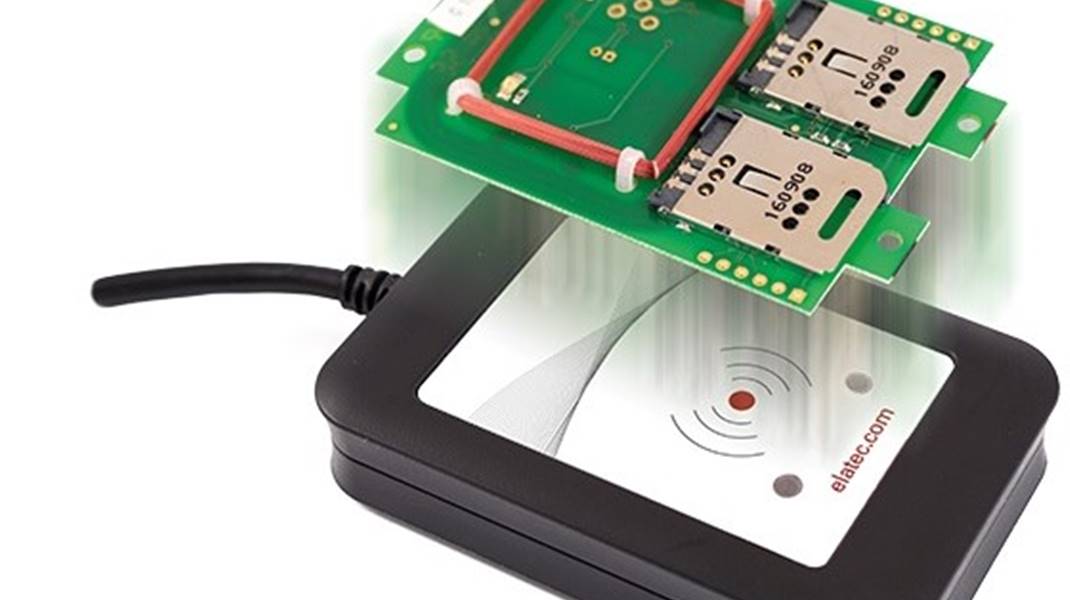 Devices that utilise RFID technology for identification purposes are widely applied in warehouse logistics, shipping or management. A number of available solutions and a ceaseless need to integrate them into a single, coherent system tends to be problematic and time-consuming. Thanks to the solutions proposed by Elatec, the costs and time that are essential to integrate new devices in the existing systems can be reduced.

The dynamically developing markets of RFID systems and wireless communication constantly pose new challenges to manufacturers and integrators of devices. These challenges are only related to the electromagnetic compatibility, but also to the choice of identification standard or type of transponder systems and readers or programmers supporting them.

Whatever the area of application, the key step is to choose a proper RFID technology for identification. Its choice depends on a number of factors, such as the expected range, type of objects to be identified or the need for the two-way transponder communication. Apart from storing a unique identifier in the read-only memory, some of these systems enable non-volatile data storage and encrypted communication with the master system.

The choice of identification technology is crucial also because of the fact that there exist numerous distinct RFID standards which differ in terms of some specific properties, e.g. frequency band (which leads to differences in antenna and transponder system size), range, modulation type, data transfer speed and so on. This may lead to a situation when the newly introduced solutions have a different communication standard than those used previously. An example of such a case may be an office building where RFID technology is applied in recording employee’s working time and room access control. In such an environment, a need may arise to integrate an additional system to give some specified workers access to printers or photocopiers equipped with RFID readers. However, the readers installed in these devices will work with different data transfer standards than those applied in the access control system.  These circumstances may force the workers to use two or more access cards: one enabling access to the workplace and another one (or more) to be identified by a printer or a photocopier. 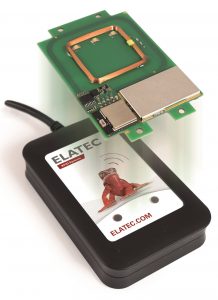 This issue has been noticed by Elatec, a famous manufacturer of solutions for RFID systems. Elatec offers universal and ready-to-use reader/writer devices attachable to the master systems via serial ports, and also caseless RFID modules designed for OEM manufacturers. The readers/writers operate mostly using RS232 or USB communication protocol, while OEM modules are suitable for many other communication standards, which gives the designer a solid dose of flexibility and makes it easy to adjust the reader/writer to the existing devices.

It is worth analysing a concrete example. The TWN4 Multitech LEGIC 42 (Fig. 1) reader, available at TME, supports many different ranges of frequencies, i.e. 125 kHz, 134.2 kHz, 13.56 MHz. The reader is equipped with RS232 and USB interfaces, and the manufacturer provides drivers for Windows and Linux operating systems. This reader type  is offered also as an OEM module. In this version it can cooperate with the master system via serial ports (3.3 V logic level, 5V-tolerant CMOS, I2C). In certain special versions, the reader can also support interfaces such as SPI, Wiegand CAN and 1-wire. The radio interface support is available for transponders manufactured by e.g. Atmel (now Microchip),  EM, ST, NXP, Texas TI, HID, LEGIC and many others that are compatible with standards such as ISO14443A/B, ISO15693, ISO18092/ECMA-340 (NFC), HITAG, UNIQUE, ISO14443 A+B (Mifare DESFire EV1, Mifare Plus, Mifare SmartMX, my-d move, PayPass etc.), ISO15693 (EM4035, Tag-It, my-d vicinity, ICODE SLI), Mifare Classic, Mifare Ultralight, Sony FeliCa, NFC Forum Tag Type 2-4, PicoPass, HID iCLASS. Moreover, an antenna operating in frequencies 125kHz / 134 kHz / 13.56 MHz supported by the standards mentioned earlier is integrated on the reader PCB. Apart from being fitted with a master system interface, the reader consists also of eight GPIOs which can be applied to control a corresponding lock, a signal diode, an audio signal and many more. Their operations can be programmed with the aid of a script language.

Apart from supporting the majority of RFID technologies, the reader/writer supports NFC and Bluetooth Low Energy (BLE) technologies, which are commonly applied in devices such as smartphones or tablet. Thanks to that, one does not have to utilise RFID card but e.g. a smartphone with a suitable application. The reader supports most popular models, such as iPhone and smartphones with Android or Windows operating systems. Now, let us come back to the example of the office building – in such a situation,  the application of Elatec readers helps avoid identification-related issues. Instead of having to carry a card or a set of those, it is enough to install a proper app on employees’ smartphones.

It will be certainly of great significance to those who utilise OEM modules that they are manufactured by Elatec. The company guarantees that the standards for electromagnetic compatibility and production norms are met (e.g. RoHS 2). The company ensures the devices’ reliability as well. More information is available on the website of TME – the distributor of Elatec products.

The manufacturer makes available a software package to develop applications for readers. Thanks to that, the reader functionality can be automatized with the use of scripts supported directly by the reader’s processor. What is more, the script can be modified at any time, hence the reader can work with some other RFID standard after alteration of the operating mode in the script. In the case of the TWN4 module, changes can be introduced via a wireless interface or a configuration card offered by Elatec. This option is a great convenience for repair specialists and technicians, who will be able to proceed smoothly with the required reconfiguration without having to waste time to disassemble the integrated devices.

Just like in the example with the office building, wherever migration from one system to another is the case,  it is essential to identify the current RFID technology to propose a new and optimum solution. A typical procedure in such cases begins with sending a currently used RFID card to the supplier or integrator. Such a time-consuming procedure is no longer required thanks to Elatec devices for RFID analysis, e.g. TechTracer Lite, which can identify the currently applied RFID technology on the spot and thus help both the supplier and the client save time, costs and avoid the risk of potential identification errors.