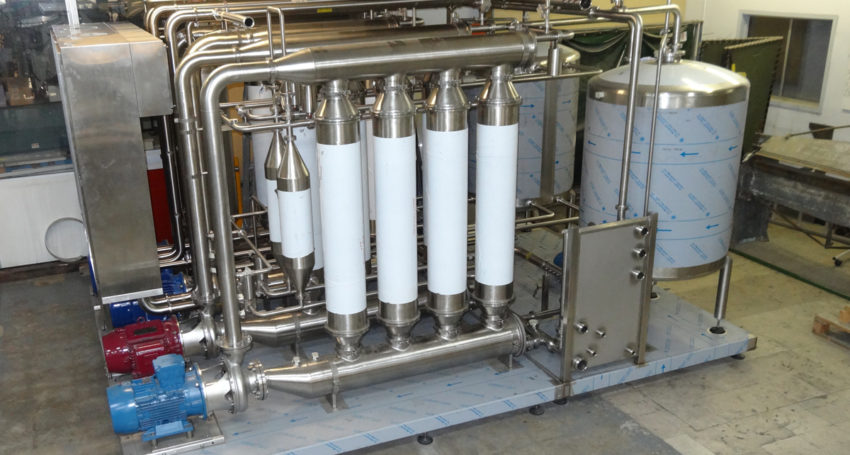 Titanium filtration membranes that extract maximum solids with minimal cleaning have
been launched commercially in South Australia.
The robust nature of the super-strong titanium also means they are unaffected by salt or
chemicals such as chlorine and can be adjusted to screen out specific materials.
Adelaide-basedAdvanced Material Solutions (AMS) began commissioning its first
commercial units last month and plans to ramp up its workforce from 26 to more than 200 to
cater for burgeoning global demand.
Managing Director Gilbert Erskine said the titanium membranes, which can extract
solids up to 80 per cent, were so strong that they could run 24-hours a day for a week.
Polymeric (plastic) or ceramic filters, which have extraction limits of around 10 per cent,
could spend 30 per cent of their time in cleaning modes, which often included chemicals.
He said his Viti-flow membrane could be easily cleaned in minutes with steam or hot
water up to 90C.
“We have the ability to change that micron and that comes down to the strength of the
titanium because as you go up in pore size you are traditionally weakening the support
structure but titanium can withstand it,” Erskine said.
“There are people claiming to make titanium membranes but there is no one else in the
world that we know of producing small pore titanium membranes in commercial quantities.”
The systems are initially being aimed at the wine industry, where they have shown the
potential to increase production by more than 7 per cent.
However, a commercial system has already been installed at a meatworks in Victoria
where the filters removed fats, oils, grease, blood cells and reduced e coli levels from 240,000
down to less than 20 parts per 100ml.
Testing has also been done at large scale breweries and inquiries have been received
from a wastewater company in Canada.
“We can remove anything that is not in solution – all the particles, bacteria and viruses,”
Erskine said.
“Titanium is not affected by chlorine whatsoever so we see desalination as a huge
opportunity for us before the water goes through reverse osmosis.
“We are also talking with people about ballast water, which is a big problem globally,
there is an opportunity to put filters in to handle that ballast water and being titanium it will
last the life of the ship.

“We also see opportunities in defence with the submarines and frigates and it is also
very good for filtering oils.”
The systems are scalable with the bigger units installed at major Australian wineries so
far featuring four sets of membranes capable of filtering 35,000-40,000 litres an hour. They
produce clean filtrate at less than 1NTU and solids of up to 80 per cent.
Based at Lonsdale in Adelaide’s southern suburbs, AMS Filtration has been in business
since 1985 and has had a long affiliation with the wine, food and beverages, pharmaceutical
and wastewater industries.
It started out making stainless steel fittings, heat exchangers and refrigeration plants for
wineries before experimenting with polymeric, ceramic and stainless steel filter membranes.
The stainless steel filters were the most effective but also the most expensive and they
were eventually set up in Indonesia to service the palm oil industry, where they proved more
profitable.
After many years of experimentation and collaboration with Australian universities,
AMS Filtration developed the titanium membranes, which it has been secretly trialling with
industry partners for the past few years.
“It’s been a 30-year journey but it is very difficult to do, titanium itself is very difficult
to work with and it’s taken us a long time and many mistakes,” Erskine said.
“Titanium is very expensive – it’s much more expensive than stainless steel but due to
its properties we’ve been able to make it much, much thinner and make the capillary size
much smaller than traditional stainless steel so we’ve reduced the weight of the membrane
and just by reducing that weight it compensates for the high cost raw material.
“We wanted to focus on wineries first because we have a history in the wine industry
but as other opportunities have come up we’ve taken them.”
AMS Filtration exhibited at the 2018 Unified Wine &amp; Grape Symposium in California
in January and took orders from American wineries without them even seeing the filters in
action. Erskine will return to the United States next month to follow up with major wineries
that made inquiries at the symposium – the largest wine show of its kind in the Americas.
Erskine said he was confident his titanium membrane filters would eventually be sold
across the world.
“We’ve put a salesman in New Zealand and we intend on having a sales force globally
so we’ll open offices in South America, North America, Europe and we will definitely have
these filters right around the world.

“We are a tiny little company so we are trying to hammer along as fast as we can go but
as we get a little bit stronger we will increase our capacity and we’ll just keep doing that to
whatever size we need to be.”
“The sky is the limit, the filtration market is absolutely enormous and even if we ended
up with a very small percentage of that you’d be talking hundreds of employees.”

Related Topics:filtration systems
Up Next