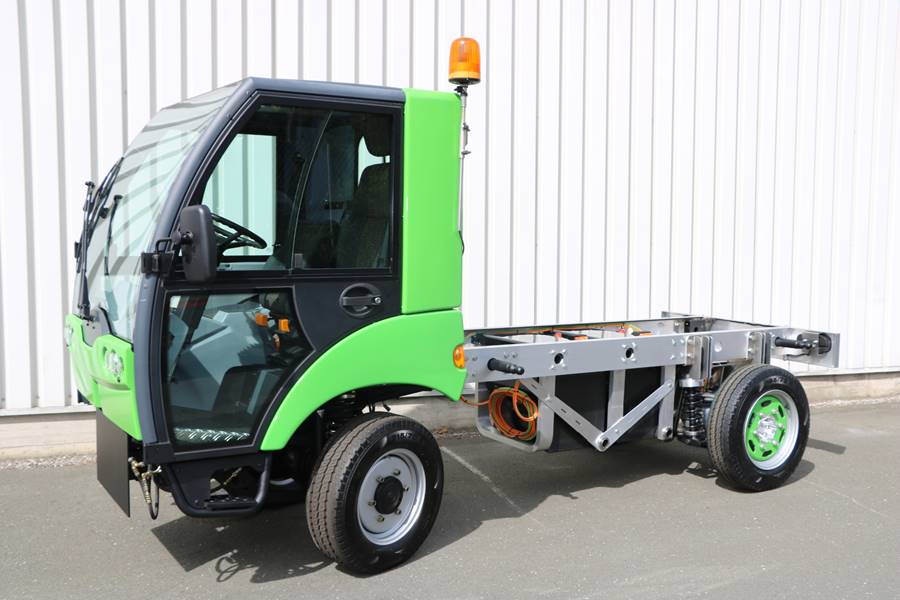 Baumüller has developed a compact drive system for a multifunctional municipal vehicle.

Baumüller has developed a compact drive system with a very high level of energy efficiency for a fully electric municipal vehicle. The vehicle is designed in series production for a speed of up to 80 km/h and has a range of 100 kilometers. An emission-free, environmentally-friendly and low-noise multifunctional municipal vehicle has been created in conjunction with other companies. It can be used with interchangeable attachments for various municipal cleaning and maintenance work, for example as a sweeper, snow plow or loader.

Laserzentrum GmbH, Polyplast Sander GmbH and SMS Engineering GmbH was supported as a funded project by the Bavarian State Ministry of Economic Affairs and Media, Energy and Technology. The project sponsor is Bayern Innovativ.

The compact drive system from Baumüller consists of two fully electric drives, each of which is mounted to the vehicle’s rear axle. Alternatively, an all-wheel drive can also be used instead of a rear-wheel drive. The drive system consists of a Baumüller DSA synchronous external rotor motor with an integrated converter, power electronics as well as a planetary gear and was specifically developed for this funded project. The planetary gear is located in the rim of the rear wheel and is directly connected to the drive system. This has the advantage that there are fewer transmission losses, since an additional drive train, such as a cardan shaft, drive shaft or differential, is not necessary. Additional advantages of the compact drive system are increased application flexibility and improved driving comfort. In addition, the drive is very capable of handling overload, i.e. gradients of up to 18 percent can easily be managed.

The special feature about the rugged newly designed DSA motor with a rated output of 18 kW is the winding switchover. This allows an automatic gear change of the municipal vehicle from a working gear to a high-speed gear. The switchover makes it possible to achieve different torques and speeds, which are automatically adjusted to the application area and speed via the motor controller developed by Baumüller. This means that in the first stage, the working gear, i.e. when sweeping or mowing, a doubled rated torque is achieved at only half the speed. This level is used for speeds of 40 km/h or less. The energy source is not burdened with large currents here, which allows for a greater range and a longer operating duration than before. With the second stage, the high-speed gear that permits speeds of up to 80 km/h, a simple rated torque is generated and the full speed is reached in the process. Despite the higher speed, the power requirement still corresponds to that of the first stage. The degree of efficiency also remains very high, thus allowing for greater range and a longer operating duration.

Related Topics:Drive systems
Up Next

Continued market growth is testament to the development of PLCs

I manage the editorial affairs for MONETA Tanıtım, which produces specific publishing, specially for the sphere, Turkey industry. We work for content development through digital and print media, with a new generation, dynamic publishing intellection.